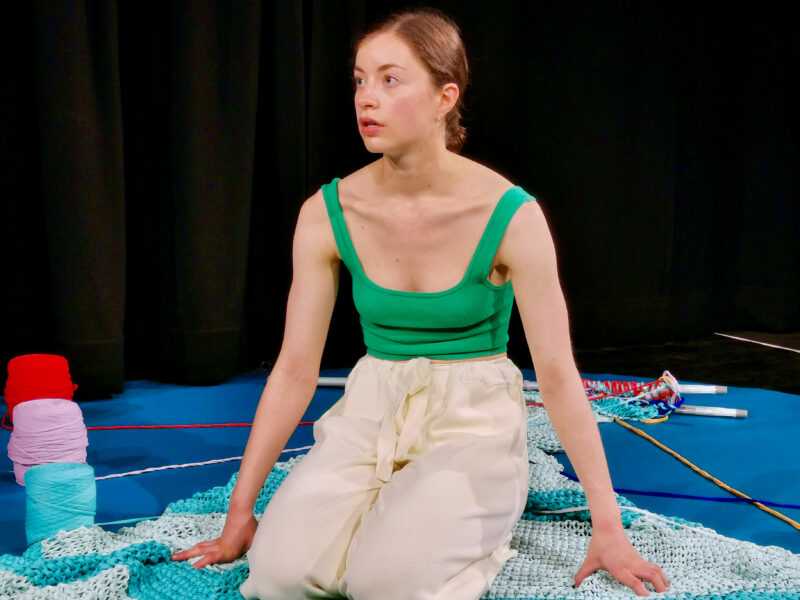 On Thursday 14 October our synagogue hosts the first of our Synagogue Nights season of intimate events in our beautiful Grade II* listed Spanish and Portuguese synagogue. Sophie Ablett and Klein Blue will weave together storytelling and large-scale knitting in ‘She Seeks Out Wool’ to tell the personal journey of a family, the relatives left behind and how the past can be woven into the present.

Presented as part of Tsitsit Fringe Festival, this intimate performance was a journey of discovery and uncovering deep family histories for Sophie. We speak to Sophie about her work, her knitting expertise and how it felt to explore your own family’s history.

You can book tickets for ‘She Seeks Out Wool’ below.

BOOK FOR SHE SEEKS OUT WOOL

Hi Sophie, can you tell us a little bit more about you and the sort of artwork you like to create?

Hi! That’s a tricky one — I often describe myself as creatively greedy! I work as an actor across theatre, TV and film but also love making my own stuff. I create theatre through my company Klein Blue, make films through my production company Rabbit & Rooster and I started doing some work as a singer-songwriter last year. So that’s why I say a little bit greedy.

With all the artwork I create, I aim to find a unique angle on a story or character and then pair that with really interesting and vivid visuals. It’s also really important to me that my work has a sense of urgency and immediacy — I’m always asking myself why here and why now? I want to entertain and transport and also have impact.

What is Klein Blue and how did it start?

Klein Blue is a collective of female theatre-makers that I head up. It all started about 3 years ago with four of us coming together to build a place to experiment. Our motto is “where theatre meets live art” — so we are always looking to push the boundaries and innovate. We want to find unique angles on important topics and chuck in some awesome visuals that help deliver the story. For example, our first show, which was all about female body hair, was centred around a girl and a gorilla handcuffed together. And there was also live waxing — so definitely had the unique factor! That show went on tour and was funded by Arts Council, so really helped to launch us as an exciting emerging company. We took another show to VAULT just before the pandemic and then of course plans to perform at Battersea Arts Centre and elsewhere were put on hold! ‘She Seeks Out Wool’ is our first show post-COVID. It debuted at the Fringe Futures Festival at The Pleasance and now we are so incredibly excited to bring it to Manchester Jewish Museum. 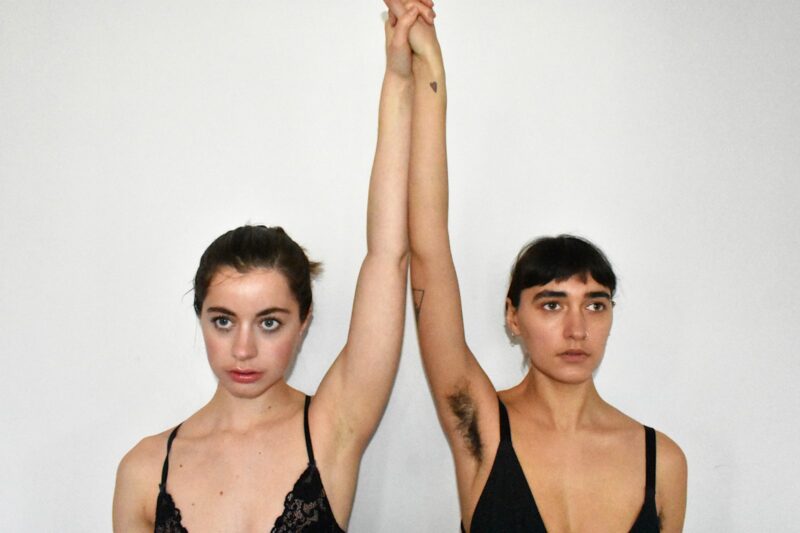 Are There Female Gorillas, Klein Blue

Where did the idea behind ‘She Seeks Out Wool’ come from? What inspired you to make this show?

To go straight to a knitting metaphor, there were a few different strands of ideas going on in my head that ended up seamlessly drawing together! I was thinking a lot about knitting and the heritage of that skill and the way it tied through generations of my family. But the key to the show was a real-life discovery: around Yom HaShoah, some of my family in Israel shared a video about a family member who had gone missing in the war. I couldn’t stop thinking about this woman and went on my own journey of discovery to get more information. I don’t want to give away any spoilers, so you’ll have to wait for the show to find out more! I was also thinking a lot about the powerful echoes of this story in today’s world — what does it mean to honour someone who got lost, how do you mend holes in your family, how do you rebuild? These are questions that feel urgent for today as much as they did after the war.

Why knitting? Were you a knitter before this show?

So I have knit all my life really! My grandma taught me and it’s something that me and my mum and my sister all continue to do. There’s been many an evening where the three of us might sit watching Bake Off, knitting away and there is something perfectly comfortable and special about that for me.

Over the course of the pandemic, I was pretty prolific — I made something like five jumpers, three cardigans, some shorts, a couple of hats, lots of knitted baby toys and probably other things I’m forgetting too! And so many other people I knew were suddenly taking up knitting or crocheting or other crafts. And I just thought it was really interesting to see this resurgence of these beautiful skills and a new appreciation for their value.

And because knitting is more often a female practice and is something domestic, I thought it would be an interesting subversion to play with dramatising it and making it epic. When we talk about things that are epic, we still often think of traditionally male domains of war etc. and I wanted to pay homage I suppose to the epic dimensions of the domestic world. After all, chainmail is a type of knitting too! 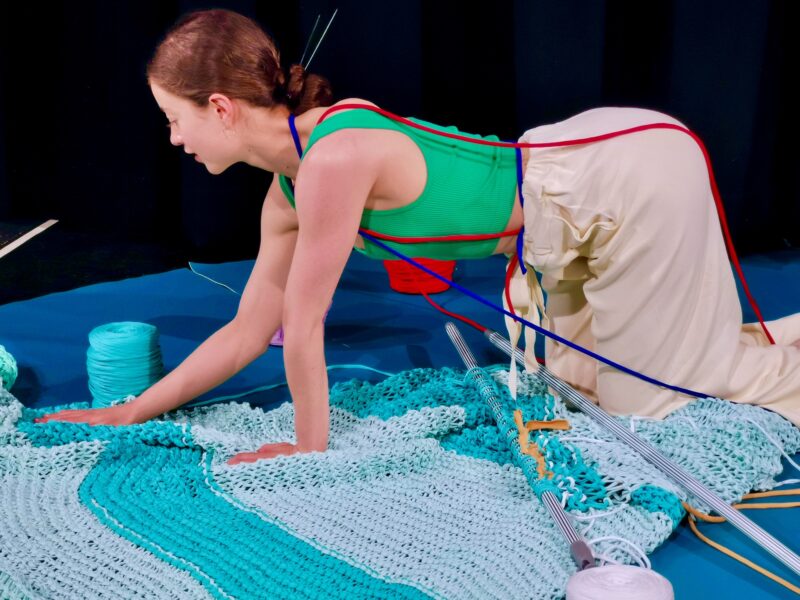 The show tells the story of your own family. How was it creating such a semi-autobiographical piece?

So incredibly special. The research that I did for it, the discoveries that I made felt so powerful because I don’t know if I would ever have found out what I found out if I hadn’t decided to write this show. At the first two performances, a lot of my family were present, and it was quite magical to have them be part of and discover the story that way. Likewise a lot of my family will be at the Manchester performance so I hope it will have the same impact! This isn’t really my story, this is our story and I feel really proud to be able to share it.

What do you hope audiences will take away from your show?

I hope that the show will resonate with them. It is a specific story but has such a universal relevance. The feeling of understanding your history and knowing your roots — particularly for Jewish community members whose roots are often very complex and not always clear. I hope audience members will have a new appreciation for knitting as well!

What excites you most about performing at Manchester Jewish Museum and in our restored synagogue?

Well what a wonderful venue to be performing at! In part, I am just so happy to be coming to Manchester — I am London-based but a lot of my family are in Manchester and Liverpool, and the story really leads there, so it feels great to have the opportunity to perform here.

And then to be in this synagogue space that epitomises care and love and dedication to Jewish heritage is just amazing. A big part of the show is about restoring lost family members — and there is a magic in telling that story in a place that has likewise been restored to its former glory.

What’s next – what should we look out for from you/Klein Blue in the future?

Lots is the short answer! This show has just been selected for some further development, which is something I’m really proud of, so will continue to be Klein Blue’s main project. I’m also working on a new play and my spoken word short film is currently doing the rounds on the film festival circuit. And then I’m finishing up a pilot of a short film series — so lots of potential directions! We’ll see which projects take off first.

‘She Seeks Out Wool’ will be performed by Sophie Ablett on Thursday 14 October at Manchester Jewish Museum in our Grade II* Listed Synagogue. Book tickets using the button below or by calling 0161 834 9879.

BOOK FOR SHE SEEKS OUT WOOL