Pamela Sturhoofd and Margaret Jacobi talk about the documentary ‘Truus’ Children’ and the improbable story of Truus Wijsmuller, the Dutch resistance heroine.

This September, as part of European Days of Jewish Culture and Heritage 2022, we will be showing the Dutch documentary ‘Truus’ Children’ during an intimate evening event at our beautiful synagogue.

The film tells the extraordinary story of the largely unknown Dutch resistance heroine Truus Wijsmuller (1896-1978), who managed to rescue more than 10.000 people from the hands of the Nazis in the years immediately before and during the Second World War thanks to her unprecedented perseverance, tact, and courage. Most of them were between 2 and 18 years old.

This improbable story, hidden for almost 80 years, comes to life in great detail in ‘Truus’ Children’. Filmmakers Pamela Sturhoofd and Jessica van Tijn spent years researching for this documentary and were able to find more than 20 “Children of Truus” worldwide – all between 83 and 97 years old.

During the event at Manchester Jewish Museum we will be joined by the film director Pamela Sturhoofd as well as Margaret Jacobi, a descendent of one of the children saved by Truus. We speak to both of them about the film and the story of Truus.

You can book tickets for Truus’ Children film screening at Manchester Jewish Museum below:

Hello Pamela, can you tell us a little bit more about how you and Jessica got into making films together?

Pamela Sturhoofd: We both started our careers at Dutch television. Then, one summer we decided to take a long summer break and travel to South America. Not even three months after that summer, we moved to Mexico to start writing articles and make radio documentaries all over South America. It was the beginning of our cooperation. Two years later we started our own company Special Eyes Productions, focusing on making documentaries, mainly for television.

Where does the name Special Eyes come from and what is the idea behind it?

When we’ve decided that we’d like to focus on making documentaries, it was clear to us that we wanted to pick subjects that needed a ‘special eye’, special perspective, to be able to tell them in the most accurate way. We knew that it was important to shine a light on some subjects or else they would go unnoticed or be quickly forgotten by people. This is what we’re still trying to do at ‘Special Eyes’: bring awareness to stories we consider worth telling. 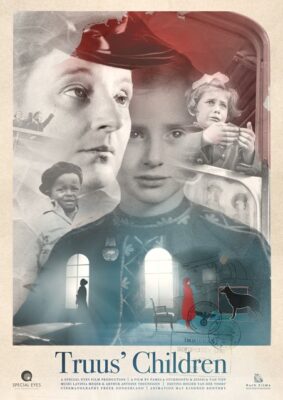 What inspired you to make the Truus’ Children documentary and share Truus Wijsmuller’s story with the world?

Lody van de Kamp, a Dutch rabbi, brought the story of the Kindertransport to us, suggesting that this would be an interesting subject for a new documentary. When we started our research about the Kindertransport, we came across the name Truus Wijsmuller. It was mentioned in several different stories and documents. This is when we got drawn into her role in this huge rescue operation, and the more we read about this brave woman, the more convinced we were becoming that her story deserved a new documentary. It took us over 3 years of research, but it was such a rewarding journey, finding a total of 23 (!) children that Truus Wijsmuller had helped save.

Why do you think Truus Wijsmuller’s story was hidden for such a long time and didn’t get the recognition it deserved?

This question has also been on our mind when making the documentary! We have tried to find the answer when conducting interviews for the movie, and we think it is most likely a combination of different factors. After the Second World War, many people did not want to look back to the past and preferred to focus on starting new families and building the (still uncertain) future. Also, as mentioned by one of the people in the documentary, it wasn’t easy for people to be confronted with all the good things Truus Wijsmuller had done, knowing that they could have done more themselves, but they didn’t. Then there is the argument that Truus Wijsmuller was not an easy personality (“But if she was, she probably would not be able to achieve this much!”). This meant that not all people around her, the ones who could have made sure she would receive her recognition, did something to keep her story alive. We are very honored that we have been able to do it and to make sure she is getting the recognition now!

Margaret, can you tell our audiences a bit more about yourself and your family link to the story of Truus Children?

Margaret Jacobi: My father was sent to Amsterdam from Berlin in 1938, at the age of 13, after witnessing the events of Kristallnacht. He lived in the Jewish orphanage there. As the Nazis were invading Amsterdam in 1940 Truus Wijsmuller persuaded the captain of a boat, the Bodegraven, to take all the children from the orphanage to England. It was thanks to Mrs. Wijsmuller that my father survived.

He kept in touch with her afterwards and she came to his wedding in 1957. He was delighted that she was recognised in the Avenue of the Righteous Gentiles at Yad Vashem.

How does it feel to see this fascinating story come to life in a documentary which travels the world?

It is very moving to see the story come to life. I know my father would feel that it is nothing less than Truus Wijsmuller deserved as she has largely gone unrecognised until now, so I feel he would be very happy to see the story being made widely known. There is also so much more to Truus than I knew – not only her incredible work during the war but her work for children in need after the war.

What does it mean for you to come and see Truus’ Children in Manchester Jewish Museum’s historical synagogue?

It feels very appropriate to see the film in Manchester because this was the city that welcomed my father and the children who came with him. The Jewish Refugee Committee took good care of the children and he made life long friends in the hostel. He would have visited the synagogue so I am glad that the Synagogue and the city, which are part of the children’s story are showing the film.

What do you hope audiences will take away from the film?

The knowledge of this remarkable woman, the testimony to the resilience of the refugees she helped and the understanding that we can all make a difference.

Truus’ Children will be shown in Manchester Jewish Museum’s synagogue on Sunday, 11 September at 7pm. You can book your tickets online, through the link below, or by calling 0161 834 9879.