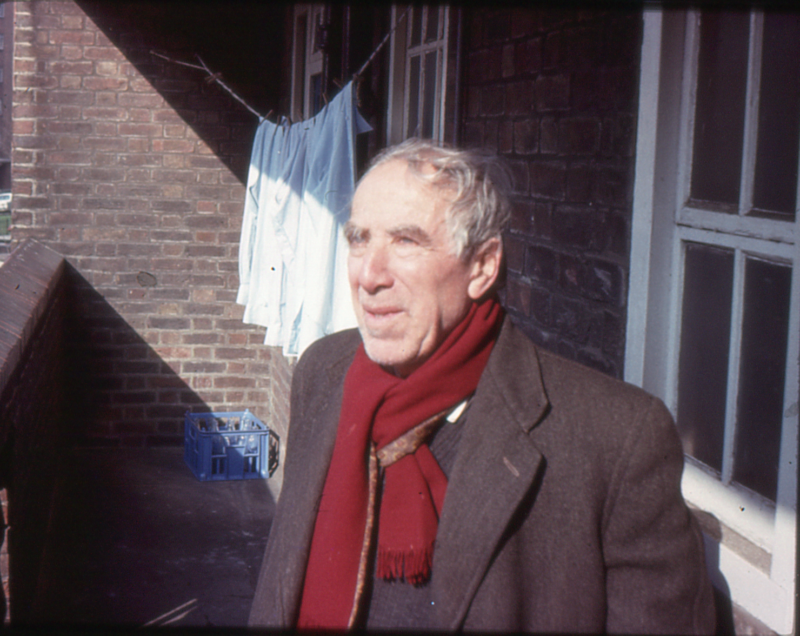 On Thursday, 8 September, we will be exploring the life and works of one of Britain’s foremost, but now largely forgotten Yiddish poets, Avram Nachum Stencl. Dr Rachel Lichtenstein shares the story of her fascination with the poet’s life and works.

Stencl was a Polish, Yiddish poet, known for living a bohemian life and travelling to many places in Europe. In 1936 he arrived in London as a stateless refugee and settled in the heart of the Yiddish speaking Jewish quarter of Whitechapel, which he affectionately called his ‘Jerusalem of Britain.’ His poems were strongly inspired by observing the busy life in the Jewish cafes, markets and the vibrant street life of Whitechapel.
When in London, he established the Sabbath afternoon Literary meetings, known as the ‘Friends of Yiddish’. The gatherings were packed out and noisy and they attracted people from different backgrounds and communities. Guest writers came from abroad to read, others performed the great Yiddish classic writers, sung songs or discussed politics. As the community died or moved away, the meetings got smaller and smaller but Stencl never gave up, and even if only one person came he kept the group going until he died in 1983.
The evening event, ‘Friends of Yiddish’, will be hosted by Dr Rachel Lichtenstein, whose grandparents were Polish Jews and who, like Stencl, settled in East London in the 1930s after escaping Nazi persecution. We speak to Rachel about her background and ask her about her interest in Stencl’s story and works.
BOOK TICKETS FOR FRIENDS OF YIDDISH

Hello Rachel, can you tell us a bit more about yourself and what you’re currently working on?

I am an artist, writer, and curator, known for my books, multi-media projects and artworks that examine place, memory, and Jewish identity. I currently combine writing and research with a post as Reader in the English department at Manchester Metropolitan University where I co-direct the Centre for Place Writing.

I have also been working in Jewish heritage as a researcher, tour guide, archivist, educator, project manager and oral historian, for over thirty years. All my research focuses on Jewish culture and settlement. I’m particularly interested in the urban history of the former Jewish East End. I have an Honorary Research Fellow position at Manchester University’s Jewish Studies Department, and I am on the International Advisory Panel for the Foundation of Jewish Heritage.

I have written multiple books including: Estuary: Out from London to the Sea , Diamond Street: The Hidden World of Hatton Garden, On Brick Lane and Rodinsky’s Room, which was described by the Guardian as ‘an elegy to the lost world of the Jewish East End.’ This book has now been translated into five languages, with a launch in 2019 of the French translation at the Jewish Museum in Paris.

I’ve also been involved in the creation of the digital Memory Maps of Jewish Manchester and East London. One of my recent projects was an essay for PLACE2020 on Mlawa, the shtetl where my paternal grandmother came from in Poland.

You are well known for your books, like Rodinsky’s Room and On Brick Lane, but you also have a background in sculpture, is that right? How does it link with your writing and research?

Art was my first love and I trained originally as a sculptor, becoming a writer almost accidentally after a literary agent witnessed a multi-media art performance in 1997 and invited me to write a book, which later became Rodinsky’s Room.

This might seem like a big jump from one form to another but my creative work has always been interdisciplinary and often multi-media too, which means I produce multiple outcomes including exhibitions, digital projects, academic articles, films, conference papers and art.

How did your interest in Stencl’s life and works start? 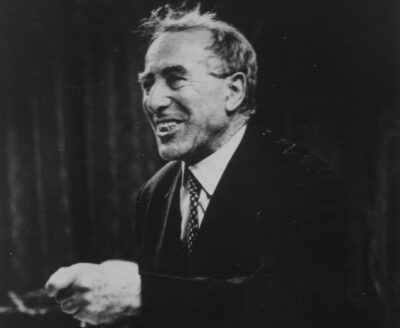 I have been fascinated by the story of the Yiddish poet Avram Nachum Stencl since I was a child. In fact, hearing stories about him in my youth was one of the reasons I moved to East London after finishing a degree in Fine Art in Sheffield in 1991. I wanted to trace any remnants of the vibrant Yiddish speaking literary world of the former Jewish East End of London that my grandparent’s so often spoke about. They were Polish emigres like Stencl, who had been members of the Friends of Yiddish literary society he established after the war, and their stories about this legendary poet, who my grandfather described as ‘the most important Yiddish poet in Britain’ and his lively Yiddish speaking Saturday afternoon salon events inspired me to move there and explore this place for myself.

In later years I became a tour guide of the Jewish east end, as well as writing books about the place and its history, but it has been Stencl’s story that I have always wanted to write. The great stumbling block being my lack of Yiddish.

During many years spent tracing the last remnants of Jewish Whitechapel, my fascination for Stencl grew. It seemed impossible to talk of the Jewish East End without hearing about him. I started to collect stories about him and interview those that knew him. Elderly people I met remembered him with the greatest affection, ‘he was a wonderful poet,’ ‘a real gentleman’, ‘a righteous person who never walked past a beggar without giving him something,’ ‘a legend.’

Many of the people whose stories I recorded have since passed away, such as: the historian Professor Bill Fishman, who really put the story of the Jewish East End on the map; Majer Bogdanski, a Polish tailor and musician who took over as the chairman of the Friends of Yiddish after Stencl died in 1983 and Julie Bloom, Stencl’s English cockney girlfriend.

I eventually collated some of these stories together and published an essay The Lost Yiddish Poet of Whitechapel: Avram Stencl. Since then, I have continued to conduct further research and during lockdown in 2020, I was commissioned by Manchester’s Poetry Library to produce a short experimental film on Stencl, directed by Andy Delaney of New Art Films. Unable to visit archives or meet people in person we conducted interviews on Zoom, which were filmed and collaged together with archive footage and other material to create the film, which will be shown at Manchester’s Jewish Museum on 8th September.

At the same time, I was contacted by Resonance FM radio station, who I have since collaborated with to develop a feature length documentary radio programme, which will be aired in September 2022. A grant from Manchester Metropolitan University has enabled me to embark on a community Yiddish translation programme, so I very much hope to finally complete the book on Stencl soon.

How was Stencl connected to Manchester? 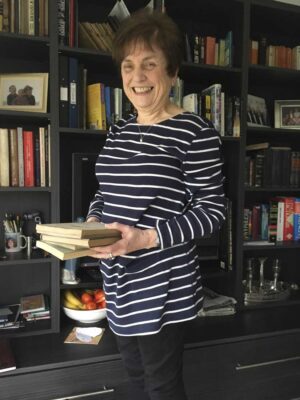 Stencl’s only surviving relative, Miriam Becker (nee Stencl) has lived in Manchester for over forty years. I contacted Miriam back for the first time back in 2005, when I was researching my essay on Stencl for London Disappearances. She is the contact for the Stencl archives at SOAS (School of African Studies) in London, which was deposited there after his death. Miriam kindly granted me permission to use these archives for my essay and since then we have met many times to discuss Stencl, his memory and his work.

Miriam and her husband Roy have invited me to their Manchester home on many occasions. Since I started working at the university in Manchester, they have become like family to me, so it is a lovely connection, full circle somehow.

What does it mean to you to reunite with Manchester Jewish Museum and to organise this event together? 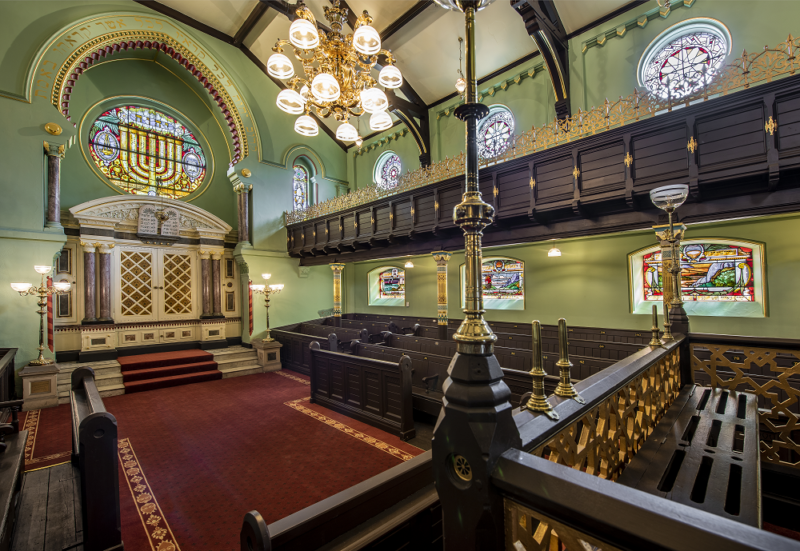 I am honoured and delighted to be collaborating with the Manchester Jewish Museum on this project. My connection to this place is deep rooted. My mentor and great friend Bill Fishman, (who was also a great friend of Stencl’s and partly responsible along with Professor Dovid Katz, of securing the Stencl archive at SOAS) was also a great friend of Bill Williams who had much to do with the original establishment of the Manchester Jewish Museum. I heard about this place from Bill Fishman decades before I visited. Since I started working in Manchester in 2017 I have visited before and after its recent transformation and can honestly say it is my favourite Jewish Museum in the world and I have visited a lot! I think the restoration of the synagogue is exquisite and very sensitively done and the perfect location to talk and celebrate the story of this great Yiddish poet, who came from a very religious Hasidic background and would have loved the Manchester Jewish Museum. Not just for its splendid synagogue but for the focus on stories of ordinary working-class Jewish people who made Manchester their home. I also very much hope that we will hear from the audience during this event, of their own stories of Yiddish culture and life in Manchester. I really look forward to hearing those stories and welcoming everyone to this very special event.

Friends of Yiddish will take place on Thursday, 8 September at Manchester Jewish Museum’s synagogue. You can book your tickets online, through the link below, or by calling 0161 834 9879.

BOOK TICKETS FOR FRIENDS OF YIDDISH