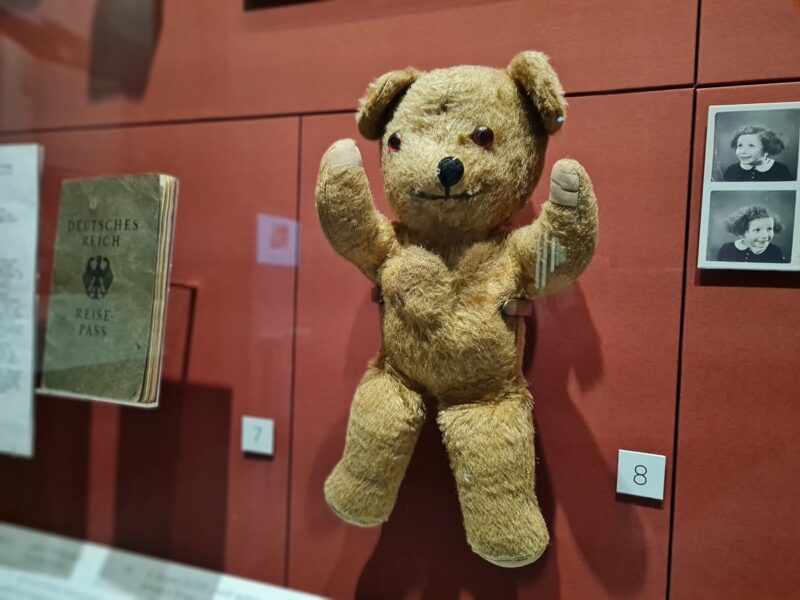 Leo’s Teddy – just one of the stories of how the Holocaust impacted Jewish communities in Manchester that will be explored as part of Manchester Jewish Museum’s Holocaust Memorial Day project.

On Holocaust Memorial Day 2022, Manchester Jewish Museum will launch a year-long project that will culminate on Holocaust Memorial Day 2023 with a public event and hosting a travelling exhibition sharing lesser known Holocaust and Second World War stories from across the UK. The project is part of Imperial War Museum’s Second World War & Holocaust Partnership Programme (SWWHPP) and will be working with local artist Becky Prestwich and young Jewish and non-Jewish people from across Manchester.

The project will build upon work that began in 2021 which aimed to get young people engaged with Holocaust Memorial Day. Manchester Jewish Museum has commissioned local artist Becky Prestwich to work with young people from King David High School and Manchester College to create a public event for Holocaust Memorial Day 2023 that will explore how we commemorate history and make it relevant and connected to people in Manchester today. This year-long project is funded by The National Lottery Heritage Fund through Imperial War Museum’s Second World War & Holocaust Partnership Programme (SWWHPP) which works with partners across the UK to share hidden or lesser-known stories related to the Holocaust or Second World War.

These responses will all inform the creation of the public event for Holocaust Memorial Day 2023 which will uncover and share hidden stories about the Holocaust whilst exploring the questions asked today. One example of the stories shared is that of Leo’s Teddy Bear (pictured). The teddy bear was brought to England by Leo Marcus. It had once belonged to his son, who hadn’t survived the holocaust. Leo settled in Manchester and gave this bear to his neighbours for their children to play with.

The public event will be created by the young people who will work with Manchester-based artist Becky Prestwich. Becky has previously directed the Royal Exchange Theatre’s Young Company and worked as a freelance arts facilitator for Sure Start, Manchester Museum and Manchester Art Gallery. She has also written for television and radio including being a regular writer on ‘Holby City’ and ‘Doctors’ and has written for theatre specialising in creating work for non-traditional performance spaces including ‘Chip Shop Chips’ (Box of Tricks Theatre Company), ‘Under the Market Roof’ (Junction 8 Theatre) and ‘One Night in Bolton’ (Bolton Octagon). Becky says of the project:

“I am really inspired to work on such an important project with Manchester Jewish Museum and Imperial War Museums. The young people are already fizzing with ideas and insights into what Holocaust Memorial Day means to them. I’m excited to work with them to explore the museum’s collections and speak to people across their communities, to uncover hidden stories and to create an event which will connect different generations in meaningful reflection.”

Collaborating with Becky and the young people will be Manchester Jewish Museum’s new Digital Intern, Ryan Croney. The digital internship role is funded by Imperial War Museum’s SWWHPP to give young people with digital skills their first role within the museum sector. The internships will provide invaluable career experience as well as encouraging museums to think and work more digitally. Ryan will be using his knowledge of creating digital films and content to explore how Holocaust Memorial Day can be engaged with online. Ryan talks about what he hopes to bring to the project:

“I am very proud to be involved with such an important project that holds a lot of emotions and meaning for many different people. I want to be able to bring that human value through digital media and tell the untold stories from the Holocaust that deserve a voice and to be shared.”

Coinciding with the public event for Holocaust Memorial Day 2023 will be the arrival of the ‘One Story, Many Voices’ touring installation coming to Manchester Jewish Museum in January and February 2023. ‘One Story, Many Voices’ is an innovative digital and sound installation created by members of SWWHPP, local communities, celebrated writers and StoryFutures Academy, the UK’s national centre for immersive storytelling. It opened its UK-wide tour at the Holocaust Exhibition and Learning Centre at the University of Huddersfield earlier this month and will be travelling to all the SWWHPP partner organisations. 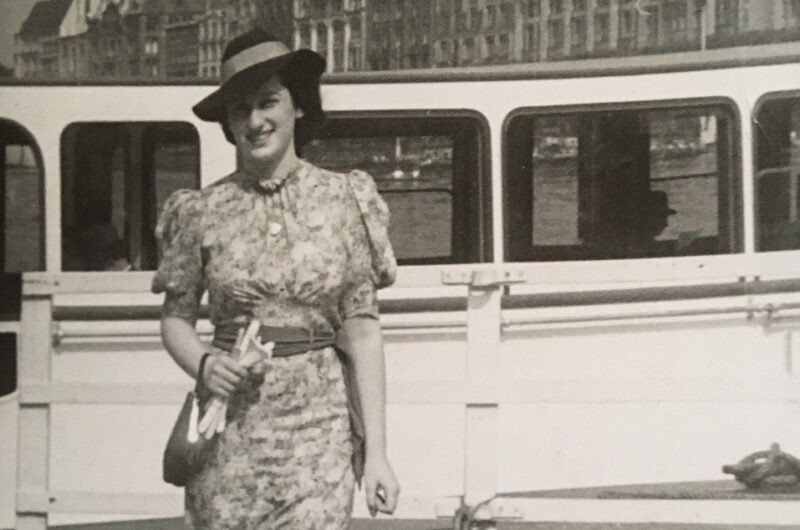 The installation shares stories from across the UK that explore lesser-known experiences of the Holocaust and Second World War. Manchester Jewish Museum’s contribution is ‘Alone But Together’ written by playwright Nicola Baldwin working with students from King David High School and facilitator Kate Bradnam, and performed by Laura Sophie Helbig and Steph Houtman. It tells the fictional story of Frieda, Esther and Lily, inspired by true stories in the museum’s collection of Jewish women who migrated to the UK on domestic visas, such as Helga Gorney (pictured above) who got her visa to come to Britain on her 18th birthday.

Listen to ‘Alone But Together’ here:

Manchester Jewish Museum is looking for more young people in Manchester aged 16-25 who are interested in joining the project and working with Becky to create our 2023 Holocaust Memorial Day event. If you are interested please email our Creative Producer Dara Laughlin at dara@manchesterjewishmuseum.com

For further information, or for interviews (including finding out more about the story behind Leo’s Teddy Bear or Helga Gorney and the other women travelling on domestic visas) please contact Dan Jarvis, Marketing & Communications Manager on 0161 511 3617 / daniel@manchesterjewishmuseum.com