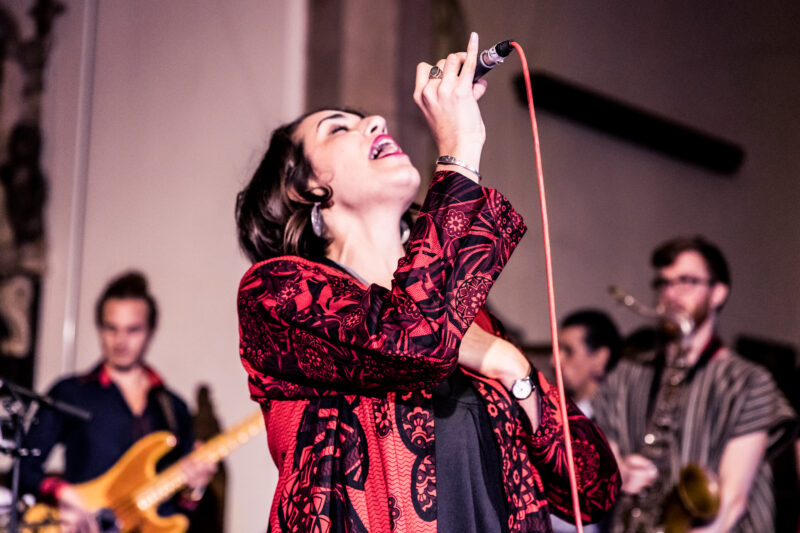 Israel-born singer songwriter Noga Ritter talks about her music, how songs can create change and her upcoming performance at Manchester Jewish Museum

Noga and her trio will bring their genre-blending music to Manchester for the first time, fusing Hebrew Jazz with global grooves for an electric and soulful musical experience.

Noga’s music brings Hebrew back to its original nomadic context, mixing influences from her Jazz, her upbringing in Israel and her work in West-Africa and London. Her shows are electric and unique, full of improvisation and interaction and connection between the musicians and the audience.

For her performance at Manchester Jewish Museum she will be joined by Tomer Eldor on Piano (Israel) and Giuliano Osella (Italy) on percussion.

We speak to Noga about her musical style, her belief that music has the power to change and what to expect in her performance.

You can book tickets for Noga Ritter’s performance at Manchester Jewish Museum below.

What does it mean for you, to be playing in Manchester Jewish Museum’s historic Spanish and Portuguese synagogue?

I am really excited to play in that beautiful and historical venue. Reading about the history of the synagogue and the core values of the museum, both resonate a lot with my music and artistry. The synagogue was built in 1874 in an area that was always diverse culturally and still is today. In my music I draw influences from many different cultures and backgrounds; West African rhythms from my work and collaborations in Senegal, Middle Eastern melodies from growing up in Israel and many more from all my encounters and traveling. I believe that music brings people together, you can look at my band and the audiences that come to my gigs – they are from all walks of life, dancing and connecting through music. By sharing stories you get a personal insight into people’s lives and therefore you can break down cultural barriers. People stop being just Jewish, Senegales or Scottish, but a person with  a story, like you and like me.

Can you tell us about your song-writing process and where your inspiration comes from?

My inspiration comes from everywhere, there isn’t one particular thing. It can be an idea, a story where the starting point can be the lyrics, or a really cool groove, riffing if the starting point comes from the melody or harmony or rhythm. Sometimes it will just come to me all together in its complete form. I tend to write a lot when I’m traveling, when I have time to process, when I’m in nature and by the sea. I grew up spending lots of time by the sea in Haifa. It heals, teaches and inspires me a lot. The name of my upcoming album is ‘Ofek’, which means horizon. I see myself also as a storyteller, I like to tell my stories or stories of people dear to me through song. I usually make them universal, and learn from other people’s experiences. For example in my album I have a song about my mum who is a healer and inspired me a lot. In that song I’m blessing her to now heal herself. Another song about a good friend who is a super powerful woman, dealing with a very difficult situation with the father of her child, who has bipolar disorder. Despite all this, she always seems to find the courage and energy to create and support others: “Creating new life, in a barren world, a river with no end, will it reach the ocean?” (lyrics from the chorus of my song ‘Saskia’)

Your music and sound are so incredibly unique, how would you describe it if you had to sum it up in a few words?

Sincere songs in Hebrew and English fused with Jazz and soulful grooves from around the globe. Powerful yet intimate, eclectic, universal and inclusive. Everyone can find themselves in it!

Beyond your stage performances, how important is the work you do with CREATE and Live Music Now with special needs schools, hospitals and care homes?

I’ve been facilitating workshops in many settings, working with many different people for 6 years now. I love it. You have to be creative constantly. We create music together, using anything the participants can bring: a sound, a word, idea and more. Often their stories are so moving that it inspires me to write songs after the workshops. There is something very raw and real about working with people with special needs or dementia. There are no filters, that’s when you see the magic music can bring. Working with Music Action International, with young refugees from all over the world always proves to me that you don’t need to speak one’s language, you can connect through music.

As part of your performance, you’ll be working with Manchester Jewish Museum’s song-writing group to create a new song about change – do you believe music can create change?

I believe music can bring change. I’m not naive, I don’t think that with only playing music we can change the world, there is a lot to be done. Growing up in the Israeli-Palestinian conflict, I know that there is a whole deep re-education to be made and of course political change, to be able to even think of peace. But that said, I see how making music together brings people from so many different backgrounds together, it breaks boundaries, makes you discover other people’s culture and hear their personal stories. I find it really important for breaking stereotypes and inviting people to be curious to know others and celebrate diversity rather than repress it. When I see in my concerts people from everywhere play, dance and celebrate together I know that I’m fulfilling my mission and it fills my heart with joy and energy to keep on in this creative journey.

Are there any UK or even Manchester musicians that have influenced your music?

I grew up listening to the Beatles with my parents and playing their songs on the piano. Also Pink Floyd of course. I remember driving far as a teenager to go to see Roger Water’s legendary concert of ‘The Wall’ at Neve Shalom (Peace Village). Nowadays there are so many artists in the UK that I’m inspired by: to name a few: my friends Donn Kipper, the beautiful jazz singer Zara McFarlane, my vocal coach and incredible vocalist Randolph Mathews, Liran Donin who produced my album and had a massive influence on my song writing process and many more.

Finally, what can the audience expect from your performance at the Jewish Museum?

An evening of joyful music that will make you move and groove, will touch your soul, get you singing, dancing and maybe even creating a song with the band. We will play songs from my upcoming album Ofek, a few covers of Israeli songs and we will feature the museum’s song-writing group and perform a song I will write with them in a workshop before the concert. Tomer Eldor (piano) and Giuliano Osella (percussion) are the best improvisers I know, we love making up new arrangements on the spot and creating new improvised songs inspired by the audience’s input. No show sounds the same, we draw inspiration from the energy of the space and of course the audience, come and join the experience!

Noga Ritter will perform on Thursday 25 November at Manchester Jewish museum in our beautiful Grade II* listed synagogue. Book tickets using the button below or by calling 0161 834 9879.