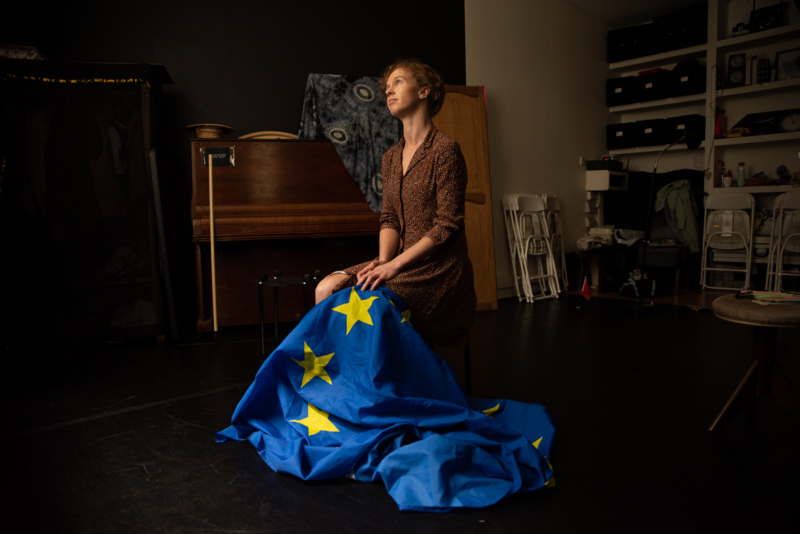 On Sunday, 6 November, Manchester Jewish Museum will welcome the London-based theatre maker,  Anna Clover, in her debut solo comedy show, Going Deutsch. Anna talks to us about her semi-biographical piece and the emotional story behind it.

Going Deutsch is the second show of this autumn’s Synagogue Nights, a series of intimate evening events in Manchester Jewish Museum’s historic, grade II* listed Spanish and Portuguese Synagogue. The festival’s aim is to celebrate Jewish art in all its diversity, while corresponding with the stories from the museum’s collection, so this one-woman comedy show was an obvious choice!
Despite its humorous, comedic format, it tackles fresh and often way too all-familiar topics like inherited trauma and how much the past shapes the future. Produced by Discerning Nights, with direction by Liz Guterbock, movement direction by Suzannah Hall and outside eye work by Jessie Brookes, Going Deutsch will make you laugh, think and ask questions.
Should you ever go back to someone, or something, that almost destroyed you? What if they’re sorry? What if they say they’ve changed? What if they’re offering en EU passport? We’ve recently talked to Anna Clover to find out.
BOOK TICKETS FOR GOING DEUTSCH 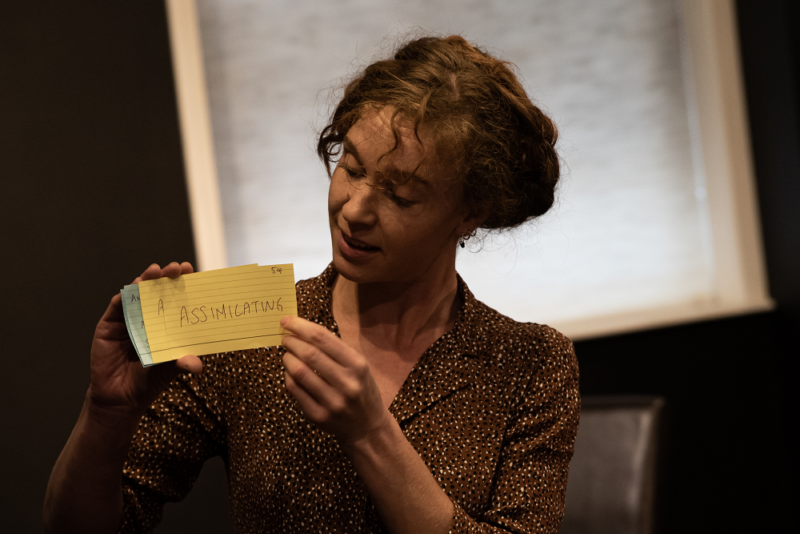 Hello Anna, can you please tell us a bit more about yourself and your work? How has your career as a performer started?

Hi. I studied theatre at university with an eye to I’m not sure what. But, I knew that I loved stories, creating them, hearing them and that for me, the live sharing of stories, was an opportunity to explore the world.

I began volunteering at an arts charity in East London where I was living, Hackney Shed, and they changed my life, as more than 10 years later I have never left. Hackney Shed works with young people inclusively, actively including those with learning disabilities, who are neuro divergent, who have metal health needs or other barriers to access (financial barriers, caring responsibilities and others). I am currently the Creative Participation Lead, which means I get to write and direct in collaboration with the young people on at least 3 shows a year.

I took a long performance break, but about 7 years ago I got into improvised comedy which exposed me to the freedom in taking risks and in letting yourself fail. I now train weekly and run a monthly night in London with my team Rhinoceros.

What is your debut solo show Going Deutsch about and what’s the story behind it?

I first had the idea for Going Deutsch after Brexit when I discovered I was eligible to receive a German passport as a descendant of victims of Nazi persecution. At that time when multiple friends were reconnecting with their Irish heritages in order to retain EU citizenship, I was so excited and relieved to have a way to hold onto my own strong European identity.

What I hadn’t anticipated was the range of perspectives others in my family had about taking this passport back and the way they talked about it reminded me of the language around people who return to abusive partners and the idea for Going Deutsch was born.

Going Deutsch is a show about cultural connection, being part of a diaspora and what we inherit from those who went before. If you have ever been spurned by a lover, or a country, you will relate to this show. The show is thoughtful and at times provocative, but the aim is to make the audience laugh. 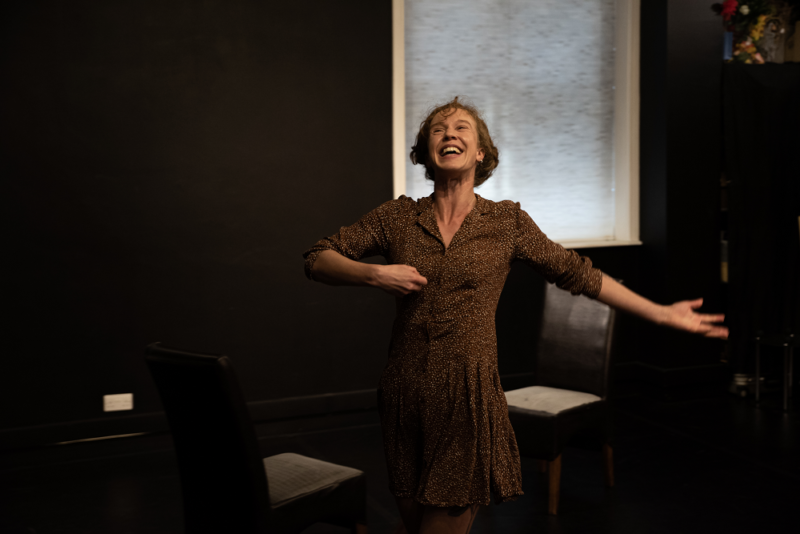 The topic of inherited trauma can be quite sensitive and complex. Why have you decided to make a comedy show about it?

For me, comedy is an accessible way to explore overwhelming and emotionally difficult topics. By holding something in a comedy bucket people who are not personally affected by the specific issue will also hopefully feel that this is a show that they might enjoy, that is of interest to them.

At the same time, by making the story in the show as specific as possible comedy just naturally occurs. All lives have comedy and tragedy in them and in Going Deutsch I have tried to be really alert to noticing where the two overlap, and they really do.

I also think when you are third generation from such a monumental and devastating event, the way trauma can manifest is surprising, you don’t know it’s there, it sneaks up on you and its origin isn’t always clear. And that in itself can be quite comic.

The sensitivity is in holding space for the pain which can be even more affecting when it comes in the middle of comedy. This very much mirrors the experience of inherited trauma, you are just living your life and suddenly something touches something deep inside that might be impossible to be trace but is also unignorable.

You’ve mentioned that you’re a grandchild of survivors and that’s how you were able to claim back your German citizenship after Brexit. Would you like to share this family story with us?

We used my Nanny (my mums mum) to reclaim citizenship. Her name was Ruth, which is also part of my name. Ruth was born in Ulm in Germany, was forced to leave school aged 12 and worked for a short time as a young teenager in the Jewish hospital in Hamburg, where she spent Kristallnacht unscrewing lightbulbs trying to make Nazis fall down the stairs.

Ruth had a visa to the USA, but when it came to it, the captain wouldn’t let her on the boat as they said ‘we already have too many Jews on here’. The story she told us was that eventually, at the age of 17, she was taken on to a small fishing boat with a circus family and brought over to Hull before living in Stirling, then Glasgow and finally in London.

Ruth kept excellent paper work of all her IDs and the name changes and status changes imposed on her by the Nazis were all very clear, so actually reclaiming the passport from an admin point of view was very easy. 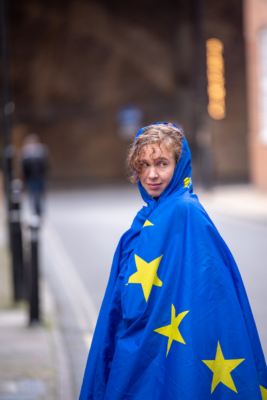 How did you find creating such a semi-biographical piece?

Me and my Nanny, Ruth, were very close. I am the youngest granddaughter and I think by the time I came along Ruth had more time and was talking more about her past, her identity. I always wanted to make something about the experience of not quite being in a culture, or lost culture but it took a long time for me to work out what that would be.

Ruth died shortly after the Brexit vote and for me her death was a huge shattering of connection to the past and Brexit then wanted to make it impossible for me to find my own connection to Europe. The biographical element in Going Deutsch is in many ways emotional. I started from a place of describing our family story and my personal relationship to it, and working on being as explicit as possible. Me and my director (Liz Guterbock), spent many hours sharing our family’s stories and noticing what we missed out, what felt too uncomfortable to say and discussing why. These were the starting points for Going Deutsch.

What excites you most about performing at MJM and in Manchester?

I am really excited about having the opportunity to perform this show in a such a beautiful space as the synagogue at MJM. That this building has also transformed and changed over the years in its relationship with its community feels very special and very right for Going Deutsch. In addition everyone at MJM is so engaged and supportive. I cannot wait to bring Going Deutsch here and see how the synagogue deepens the show and emphasises the significance of my Jewish heritage in the story.

What’s next? What should we look out for from you in the future?

I am really hoping to take Going Deutsch further. Currently I am doing the majority of the production elements myself and I would love to work with a design team on the show. My real dream for this show would be to tour it internationally. I would love it to start conversations amongst diaspora families, Jewish and not, about connections, roots and ideas about going back.

I would also very much like to take it across Europe, specifically Germany and discover how people feel about it there, to see how I feel working there, as a citizen. Beyond that I am continuing to write with and for young people, perform improv and have a new personal projects quietly brewing in the back of my mind that I hope to start germinating in the next couple of years

Going Deutsch will take place on Sunday, 6 November at 7pm at Manchester Jewish Museum’s former synagogue. You can book your tickets online, through the link below, or by calling 0161 834 9879.