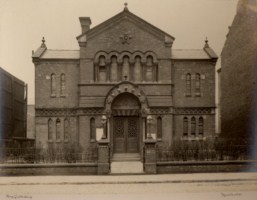 On 4 February 1872, Manchester’s growing Sephardi  community met to discuss building the first Sephardi synagogue in the city (Sephardi Jews are those whose origins lie in Spain and Portugal).  Two years later our synagogue opened – on 6 May 1874.  The Sephardi community thrived and by 1904 a second Sephardi synagogue was built in south Manchester.

Over the years our synagogue has changed to reflect the needs of the congregation. In 1919 a plot of land was purchased at the rear of the synagogue to create a new succah (temporary hut constructed for use during the Jewish festival of Sukkot). Complete with a sliding roof, this ‘succah building’ became permanent and was used as a Congregational Hall. It is now our learning studio and kitchen.

In 1913 former Synagogue President, Ezra Altaras, passed away. His family paid for a large memorial window to commemorate him. This memorial window now sits proudly over the Synagogue’s Ark. Following this, other families paid for similar memorial windows on the ground floor. We now have over 40 magnificent stained-glass windows, many of which depict biblical scenes. 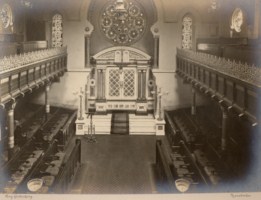 By the 1970s the congregation was moving out to the suburbs and the synagogue membership was starting to wane. The last wedding took place between Jeremy Colman and Deborah Hodari on 25th September 1977.

During this time a Jewish heritage committee was formed and local historian, Bill Williams, appointed to write The Publication of the History of Manchester Jewry. The idea of converting our synagogue into a museum was first broached by Werner Mayer, it’s then President in 1976.

The Jewish Heritage Committee, which later became the museum’s first board of trustees, was formed and launched a public appeal to raise funds to convert the synagogue into a museum. In 1982 the synagogue’s congregation moved to a new building on Moor Lane, Salford and building work began on the new museum.

After two years of conservation work our museum opened on Sunday 25 March 1984 with a temporary exhibition The making of Manchester Jewish Museum. A new permanent exhibition opened a year later.