Do you have a passion for Jewish culture? Do you like exploring new things and sharing ideas? Do you want to meet new people?

Join our in-person Jewish Culture Club and discuss and explore a range of Jewish books, TV, film, food, fashion, music, art, theatre and any other cultural works you enjoy! This group is open for everyone, whether you identify as Jewish or are just interested in finding out more about Jewish culture.

Each month the group will choose a work to talk about, whether that’s a book, a music album or a TV show. It’s a great chance to make connections with different people, explore your own identity and experience Jewish stories and culture.  The group will be hosted by Eliora Goodman, Demi Franks and our own programming team members Gareth Redston and Gemma Meeks.

For our first meeting we will be talking about Carol Isaacs’ The Wolf of Baghdad. In the 1940s, a third of Baghdad’s population was Jewish. Within a decade nearly all of Iraq’s 150,000 Jews had fled. Of those remaining, most escaped in the 1970s or were killed. Today fewer than half a dozen remain. The Wolf of Baghdad is a graphic memoir of a lost homeland, a wordless narrative by an author homesick for a home she has never visited.

If you’re interested in finding out more about Carol Isaacs before the club, you can also attend the film screening of The Wolf of Baghdad at the Museum on Thursday 4 November, which includes a Q&A with the artist.

This group is open for everyone aged 18+, whether you identify as Jewish or are just interested in finding out more about Jewish culture.

Refreshments will be available as part of the evening. To book a place on the Jewish Culture Club please email gemma@manchesterjewishmuseum.com with your name, contact address and telephone number.

About Carol Isaacs & The Wolf of Baghdad 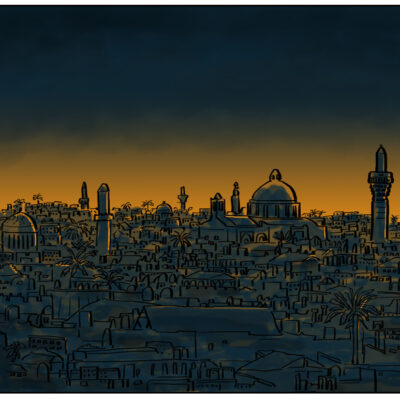 The Wolf of Baghdad

4 Nov 2021 7:00 pm
Carol Isaacs (AKA The Surreal McCoy) presents her animated graphic memoir of a Jewish family’s memories of their lost homeland and the little-known story of Iraqi Jews, accompanied by a soundtrack by 3yin.